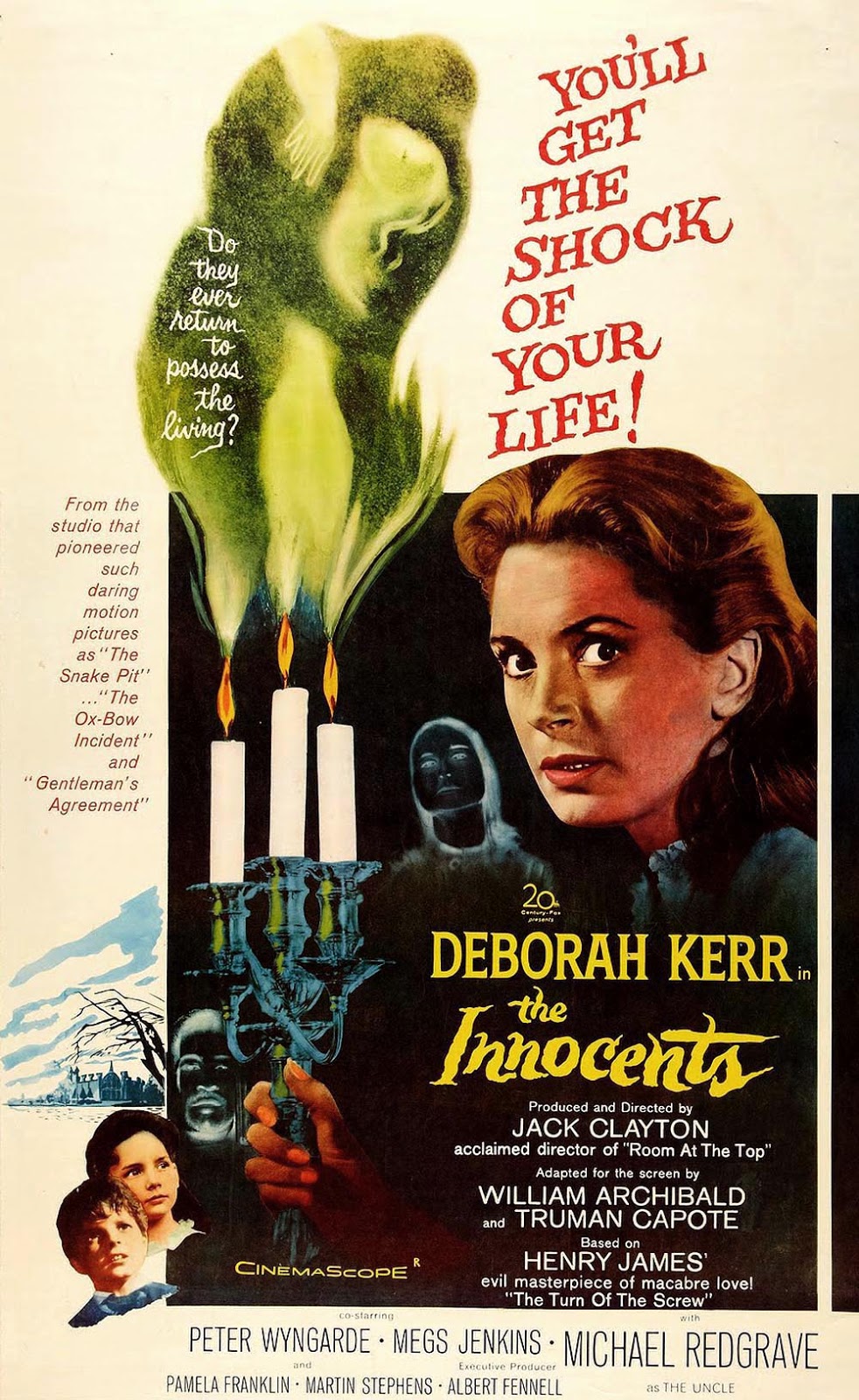 Who's in it?: Deborah Kerr (The King and I, the '60s Casino Royale), Martin Stephens (Village of the Damned), Pamela Franklin (The Legend of Hell House, The Food of the Gods), Megs Jenkins (Ivanhoe), and Michael Redgrave (The Lady Vanishes)

What's it about?: The definitive, classic adaptation of The Turn of the Screw.

How is it?: I've watched The Innocents three times over the last couple of months. Like the novel it's based on, it haunts me. I can't stop thinking about it, wondering what and how much it's trying to say and what I need to do with what it doesn't say. Are the ghosts real? Is the governess insane? I think I've come to some answers to those questions where the novel is concerned, but do those same answers apply to Jack Clayton's film?

Possibly not. Clayton's adaptation, based on a script that was touched by a few people, including Truman Capote and Clayton himself, keeps the basic premise and setting of Turn of the Screw, but also makes some notable changes. It raises the age of the main character (Deborah Kerr), which is significant, and it muddies her mental state by removing some of the novel's scenes and having her react differently to some things than the way she does in the book.

A big example is how it casts ambiguity on the existence of the ghosts by almost always showing the governess' reaction to the ghosts before seeing the ghosts themselves. When we see them, are we only seeing them through her eyes? The film also adds a scene where the governess sees a photo of the deceased groundskeeper before she sees his ghost. How much has her vision of his spirit been influenced by the photograph? She never sees a photo of the former governess, but when she sees that ghost it's always at a distance with unclear features.

The one exception to this uncertainty is at the very end of the film. The last time she sees the ghost of the groundskeeper, the audience sees him first, leading us to believe that he's real. I'm not sure how I feel about that. On the one hand, I like the doubt created through most of the film and part of me hates to see it done away with. On the other, part of me likes that after setting up this puzzle, the film actually offers a subtle solution.

Another change from book to film is the death of the little boy, Miles (Martin Stephens). They both happen basically the same way: when the governess forces Miles to face his demons and speak the name of the groundskeeper who both mentored (in a twisted way) and tormented him. Miles falls down dead and it's always unclear exactly why. I love this essay by Muriel West for constructing a solid argument about what actually kills Miles in the novel. Based on the governess' behavior throughout the book as well as quiet clues that Henry James plants in the scene itself, West believes that the governess literally (but accidentally) smothers Miles to death after figuratively doing it the whole story. The film doesn't block the scene that way, so Kerr's character isn't physically suffocating Stephens', but the symbolism is still there. It's a metaphor that somehow manifests itself physically. Maybe the ghost has something to do with it.

Clayton clearly wanted to leave the viewer a lot of options in interpreting The Innocents. Even the title can be taken a couple of different ways. Does it apply to the entire household (including the governess) or just Miles and Flora (Pamela Franklin)? If it's just the kids, does the title claim that they're truly innocent as the housekeeper Mrs Grose (Megs Jenkins) insists, making how the governess treats them even more tragic? Or is the title ironic and the children have already been somehow corrupted by the deceased groundskeeper and governess?

However you interpret it, as pure film-making, The Innocents is superb and deserves its status as a classic. When Truman Capote took a run at the script, he added lots of symbolism about death and decay: wilting roses everywhere and bugs crawling out of statues' mouths, for example. And Clayton and cinematographer Freddie Francis create a creepy, haunting atmosphere that's perfect for James' gothic story.