Who's in it?: The voices of Henry Darrow (a prolific character actor in the '70s and '80s who went on to play Zorro again in the short-lived CBS live-action comedy Zorro and Son - which I won't be covering - and also played Zorro's dad in the much longer '90s live-action series), Julio Medina (another busy character actor on TV in the '70s), and Don Diamond (I know him best as Corporal Reyes on Disney's live-action Zorro show in the '50s).

What's it about?: Filmation's animated version, originally ran alongside their Saturday-morning Tarzan and Lone Ranger cartoons on The Tarzan/Lone Ranger/Zorro Adventure Hour.

How is it?: I expected it be similar to Filmation's other adventure cartoons like Tarzan, Lone Ranger, and Star Trek, but Zorro is actually a bit different from those. It's the only one Filmation farmed out to another animation studio, which happened to be in Japan. The anime influences are really apparent, especially in the look and comedy antics of Sergeant Gonzalez (Don Diamond). And while the budget is kept under control with reusable action animation, it's not the same animation that I'm used to seeing in the other Filmation cartoons where Tarzan, Lone Ranger, Captain Kirk, and Flash Gordon all run in exactly the same way. The most noticeable reused animation is in the sword fights, but there are lots of different stock moves that the studio rearranges enough to keep interesting. And they're good, creative moves. Sometimes fights last a little longer than my older, short-attention brain wants them to, but when I was a kid, this is what I showed up for.

New Adventures of Zorro also uses some of the same music from those other Filmation shows (which I love, by the way; it's part of the soundtrack of my childhood), but it's rare. Most of the Zorro soundtrack is made of Spanish guitar and other Latin-inspired music. It's exciting and good.

The mythology is mostly the same as previous versions with one, huge exception that I'll get to in a minute. It's heavily inspired by the Disney show which played up the secret identity and Zorro cave to basically turn Zorro into a Western superhero.

Most versions have a female character that Don Diego is either engaged to or interested in, but Filmation's is remarkably chaste. Diego (Henry Darrow) hangs out with a woman named Maria whom I think is the daughter of the local governor. They may have said for sure and I missed it, but that's what I think I've figured out. At any rate, their relationship seems to be purely Platonic.

Like other versions, Diego lives at home with his father, but his dad isn't as exasperated with Diego's apparent laziness as he is in other versions. There's a certain amount of eye-rolling, but he seems to have mostly accepted Diego's flaws.

And like other versions, Zorro's chief adversary is the captain of the local guard who collects taxes for the greedy, selfish governor. The captain also has a fat sergeant, named Gonzalez. That character is right out of the original Johnston McCulley stories and appears in most adaptations. He was renamed Garcia in the Disney series, but Filmation uses the original name. And they have Don Diamond provide the voice in sort of a promotion from his role as Garcia's sidekick in the Disney show.

The big change to all earlier versions is that Zorro's sidekick is no longer a mute servant, but a bona fide costumed adventurer named Miguel (Julio Medina). Zorro frequently calls him Amigo in battle and I wondered whether that's his official superhero name. I don't think it is; I think Zorro's just not calling him Miguel when they're both in costume. But I wish that Amigo was his superhero name, so bad guys could say, "Oh no! It's Zorro and Amigo!"

It sounds silly, but it's no sillier than Miguel's pastel-colored costume, which looks like it was inspired by Zorro, the Gay Blade. He just needs little dingle-ball tassels hanging off the brim of his hat.

There are only 13 episodes of the series and they're all pretty good. The plots are generally Robin Hood style stories where the governor and Captain Ramon overtax the people, so Zorro and Miguel steal the taxes back. But there are always fun twists like Ramon hiring his own Zorro to defeat the real one, or natural disasters like flash floods and earthquakes complicating everyone's missions. There's also a great recurring character, Lucia, a swashbuckling pirate captain who uses her crew to either help Zorro or oppose him depending on her needs at the time.

Rating: Four out of five Miguels. 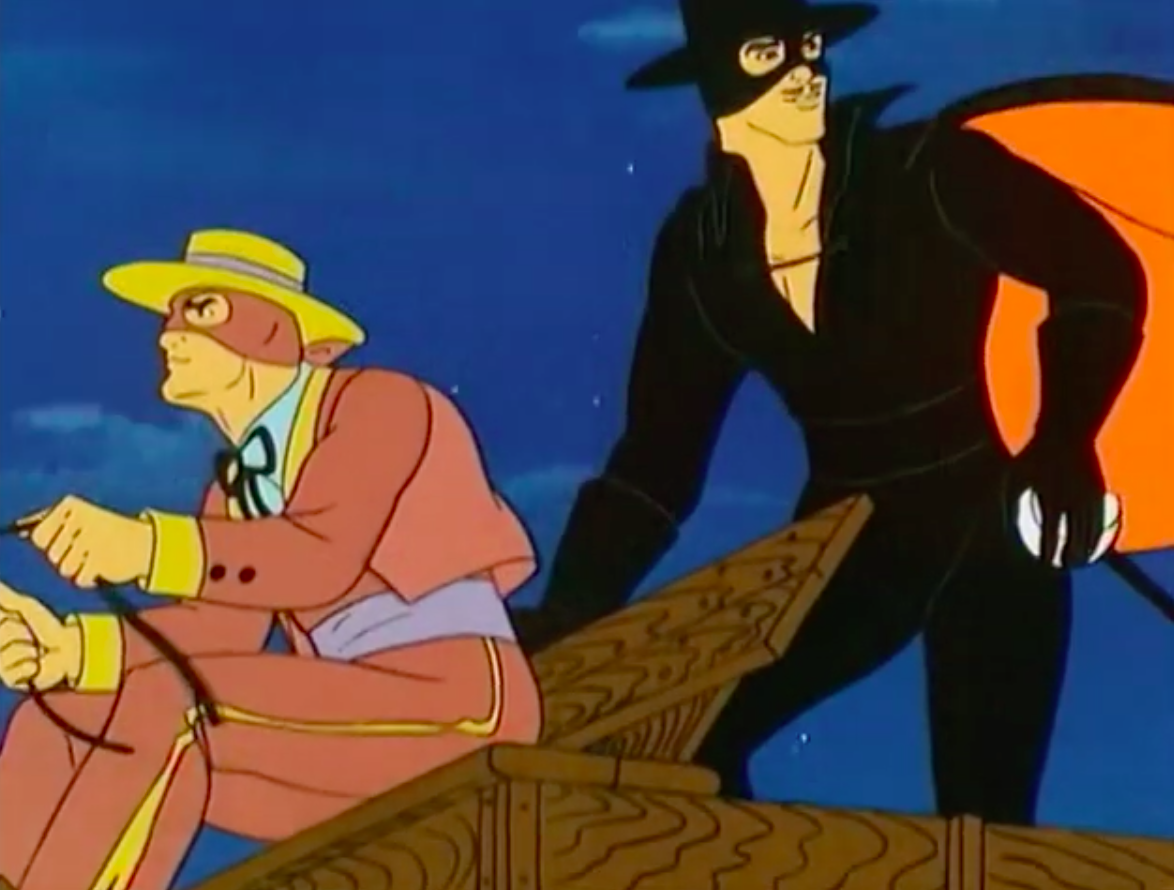