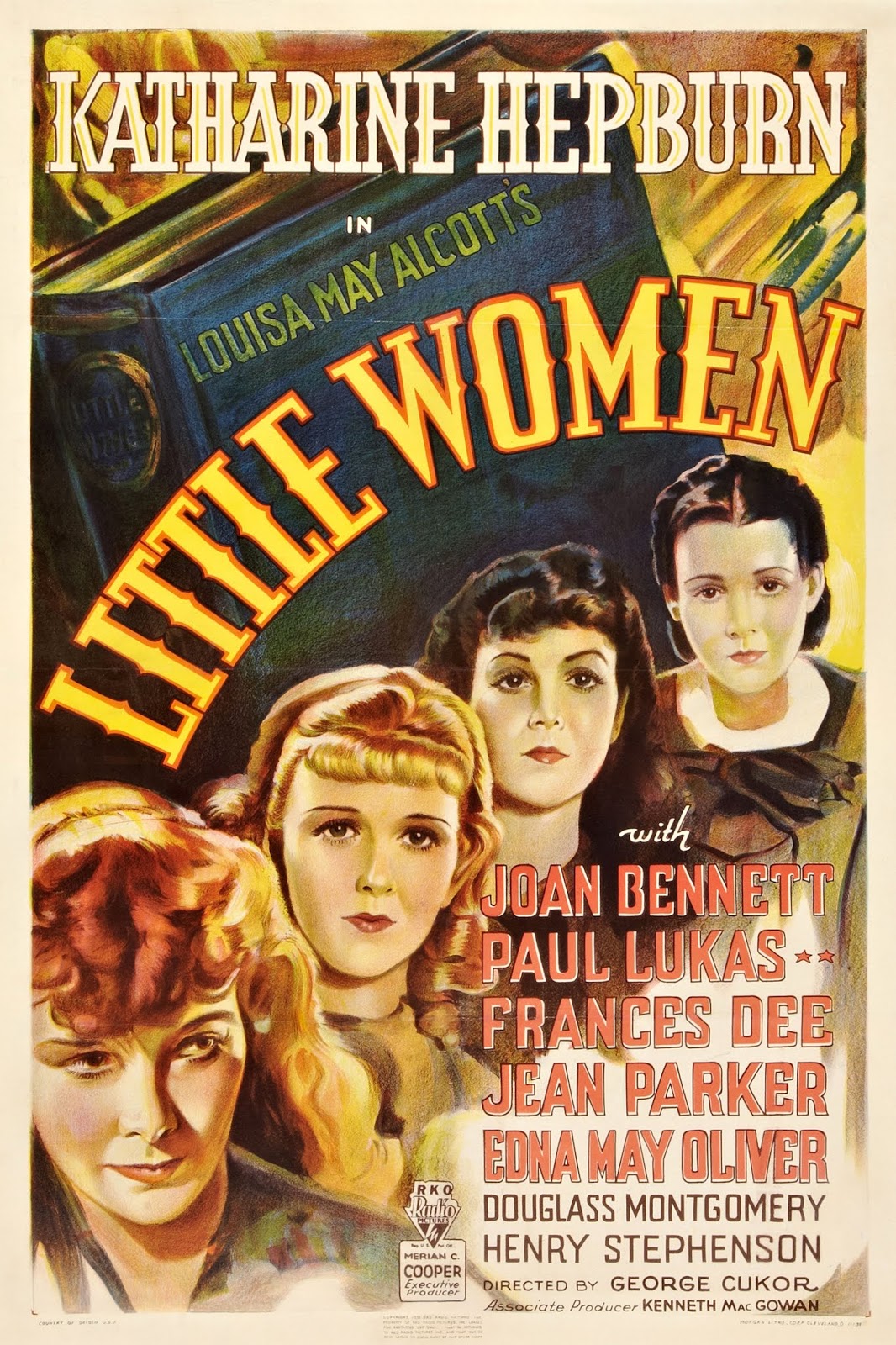 What's it about?: The first major adaptation of the novel, but also a vehicle for rising star Katherine Hepburn.

How is it?: George Cukor's version leaves out some story points that I miss, particularly in the rivalry between Jo (Katharine Hepburn) and Amy (Joan Bennett) and Amy's burning Jo's writing. As a writer who's sometimes had to start manuscripts over due to computer crashes or whatnot, I understand Jo's horror and frustration over that in the book. And it's especially heinous to think that Amy did it on purpose. But Amy is still a self-absorbed brat at that point, and it sets a bottom level that she's able to rise from as she grows up. Without that - or really any special conflict between Amy and Jo - the story loses impact when the sisters are not only able to get past their differences, but Jo can sincerely be happy when Laurie marries Amy.

Cukor's version also fails the Amy/Laurie story by having it develop mostly off camera. Their story is one of my favorite things about the novel, so this is disappointing. But the '33 Little Women is all about Katherine Hepburn and Jo.

That would be okay, I guess, if there weren't other, later versions that manage to balance Jo's story with the other characters'. If you have to pick one character to focus on though, Jo is it. And she's a great character, don't get me wrong. She's just not my favorite, so Cukor's movie is already going to have limited appeal to me. It's made worse though, by the way that Jo is portrayed.

Jo should be ungraceful, but Hepburn exaggerates her voice and movements to make a lumbering, boisterous oaf. She mellows out over the course of the film, but she's hard for me to watch in the early scenes. I also don't see any chemistry between her and Laurie (Douglass Montgomery).

Montgomery is heavily made up with eyeliner and lip rouge (the only male in the cast to get that treatment), so while Montgomery plays him just fine, he comes across like a dandy. He's also an angrier character than I want Laurie to be, though I respect the choice to make him that way. In the novel, Laurie has been through a lot and his relationship with his grandfather is strained at first (something they both have to grow out of), so there's reason for him to have some anger at his core. And I don't think Montgomery goes too far with it. My biggest problem is that I just never feel any heat between his Laurie and Hepburn's Jo. Both of them are good-looking, but neither is the least bit attractive, if that makes sense.

I have the same problem with Jo and Professor Bhaer (Paul Lukas), but that's always going to be the hardest relationship to sell in the story. In the novel, Bhaer comes in late and he's kind of pitiable and there's an age difference, so it's hard work getting me to root for them, even if you're Louisa May Alcott. She pulls it off by making the professor charming, the age gap vague, and by surrounding the relationship with a lot of other, more compelling activity. If we're mostly focused on Jo, like this version is, that relationship becomes hyper important. I never get into it, though. Partly because I associate Paul Lukas most with kindly, old Professor Aronnax in 20,000 Leagues and he's not doing much different in Little Women. It's also unhelpful that he constantly refers to Jo as "my little friend," emphasizing the age difference even more.

But my complaints about the Jo parts aren't to say that everyone else is completely sidelined. The other characters may not get as many great moments as they deserve, but they do all get moments. Joan Bennett is a particularly good Amy and there's a nice scene where the sisters each get a dollar for Christmas and choose to spend it on their mother. At first, Amy decides to split the dollar between some perfume for mom and some drawing pencils for herself, but later returns the pencils and buys a larger bottle of the perfume. That's the essence of Amy right there and Bennett is lovely with it.

Frances Dee's Meg is beautiful and subtly resentful about the March family's reduced finances. She doesn't outright complain, but she makes comments that are clues to how she's feeling, especially if you know her from the book. And her romance with Laurie's tutor, Mr Brooke (John Lodge) is sweet. They're a handsome couple and get a nice scene together, even though mostly the movie cares about how their romance affects Jo.

Jean Parker's Beth has a couple of great moments with Laurie's grandfather (Henry Stephenson), as it should be. Their relationship is one of the sweetest, especially in the Greta Gerwig movie, but also here, although this one's more subtle. I love the escalating gift-giving between the two of them. Mr Laurence invites Beth to come play the piano at his house (paying off a wonderful scene earlier where Beth is playing the March family's piano and frustrated because one of the keys doesn't work), then Beth thanks him with a gift of handmade slippers, which he responds to by giving her his piano, and she goes to thank him for that, can't really find the words, and just sits on his lap and hugs him. It's beautiful and heartbreaking, especially knowing what's going to happen to her later in the story.

A second moment just has Mr Laurence, but it's all about his relationship with Beth. It's when she's sick the first time and no one expects her to live. He's by himself in the Marches' sitting room and just sort of pacing. At one point, he walks over to his old piano and puts a hand on it before wandering away again. Understated and lovely.

Samuel S Hinds is barely present as the girls' father, but Spring Byington is a lovely, matronly Marmee. She's noble and convincing as a woman who's struggling in the absence of her husband, but also quite adept at supporting and raising her daughters and holding the household together.

I almost forgot to mention Mabel Colcord as Hannah, the Marches' domestic helper. She's fine as a stereotypical Irish housekeeper, but not really memorable. I only bring her up, because I'm curious to compare her with other versions and see how the character might be given more life. I feel the same way about Edna May Oliver's Aunt March. She's a grumpy old woman, but nothing more than that. Definitely room for other actors to do more with that role.

So to sum up, there are exquisite elements in Cukor's adaptation, but I wish that the film focused on providing more of those and less of Jo just being loud and awkward, especially in the early parts of the film.

Rating: Three out of five Amys. 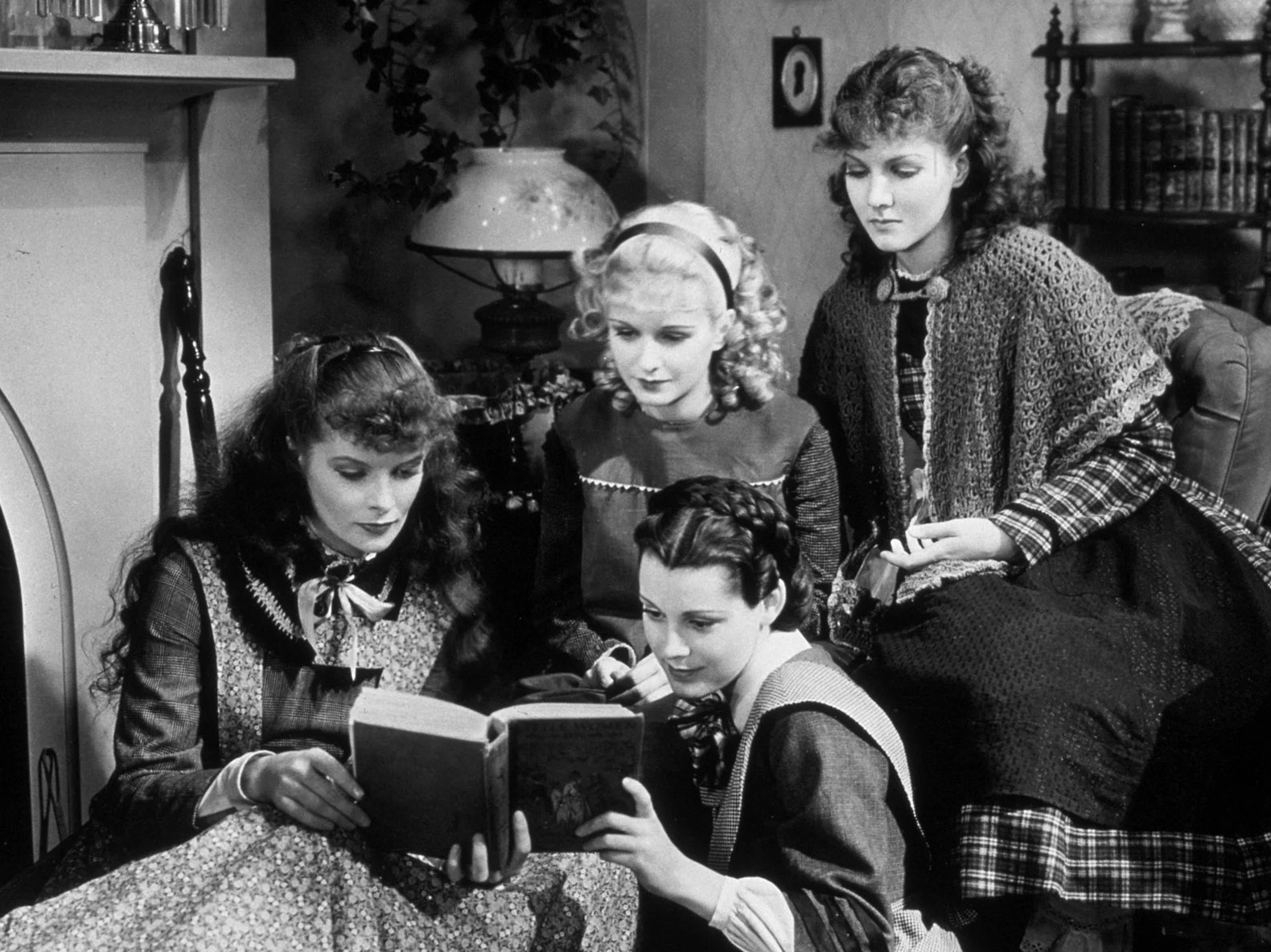