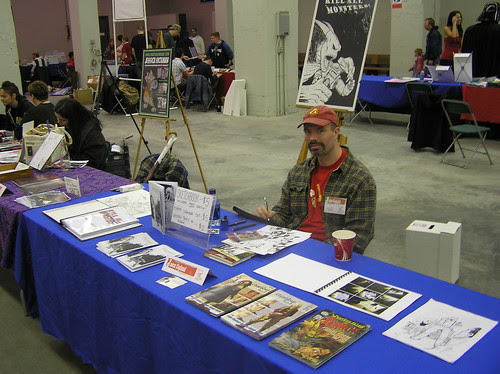 I've got my FallCon photos up at Flickr, finally. As usual, I didn't take nearly as many pictures as I wanted to. In fact, I completely forgot my camera on Saturday.

I picked Jason up at the airport on Friday, then we went to Famous Dave's for dinner, and then headed late over to a shindig at Brent Schoonover's place. It was nice to hang out with Brent and his Horrorwood cohort Brandon Terrell and their wives. They had a fire going and some great food in the garage. There were a few people I didn't know, but after a while Martin Powell showed up and - after the premiere of Clone Wars was over - Grant did too.

Saturday morning we met Grant, Jess, Darla, Corbett, Jen, and Paul for breakfast at McDonald's, then headed over to the fairgrounds to set up. This was FallCon's first year in the grandstand and everyone I talked to hopes that it can become the con's permanent location. Judging from the line to get in (it was still snaking around an hour after the con opened), there had to have been a record crowd there, but the space easily absorbed us all. There was even room for a reading area and a Mini-Comic Creation Station complete with copy machine.

I spent most of the day at my table on Saturday. Jason was on one side of me and we gave away preview books for the all new Kill All Monsters. On the other side of me was Jess Hickman, who showed me some concept art for the Cownt. If you haven't heard me talk about the Cownt before, I'll catch you up in another post and show you Jess' art. It's a fun concept and we've got a great team lined up for a Cownt comic. I was also giving away prints of Gav Spence's interpretation of the Cownt and people loved them. If we can make the comic live up to the expectations set by Gav's drawing, we'll have a hit.

Sunday breakfast was at Perkins. A lot of the gang had been drawing commissions all night and slept through breakfast, but Otis Frampton and his wife Leigh showed up, so Jason and I had a great time getting to know them better. Otis has been working very hard and I'm excited to see the fruits of his labor. I've linked to his stuff enough here that you know how much I like his work.

We'd given away just about all of our previews and prints on Saturday, so I didn't push them as hard on Sunday. Because of that I came home with some, but it was a slow, rainy day anyway and I was coming down with a cold. Neither of those helped my motivation.

I spent a lot of time away from the table on Sunday. I was good and only bought two things at the show: Essential Defenders, Volume 2 and an Adam Hughes Black Canary poster that Adam signed for me. Ten bucks total. Most of my wandering was just to see who was there and what they were up to.

I totally embarrassed myself in front of Dwayne McDuffie by gushing all over him about Milestone and how excited I am he's bringing those characters back. He was so awesome and nice and gracious, but I felt like an idiot anyway. I thought I was beyond getting all ga-ga over creators, but apparently not. I should probably do a Milestone post at some point if I can figure out how to make it on-topic.

The best part of Sunday though was when I actually was at my table and we spent some time brainstorming ideas for the Cownt comic. I've got three, solid stories for it now and have finally nailed the tone I want them to have. All I've got to do is write them.

It was also great seeing so many friends again. My buddy was Charles was there sitting next to his hero Don Rosa. My brother-in-law (and Cownt co-creator) Dave showed up for a while. It's always good talking to Sam Hiti and hearing how his projects are coming. And some other friends and family stopped by as well. My son David was as sick as I was, so he didn't feel like coming, which was too bad. He would've had a blast.
at October 10, 2008

Email ThisBlogThis!Share to TwitterShare to FacebookShare to Pinterest
Labels: conventions

It was great seeing you and getting a chance to talk a bit. :)