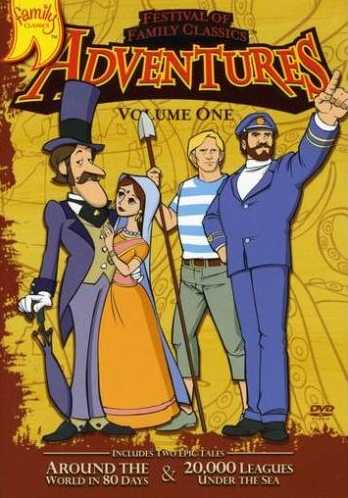 Growing up in the '70s, Rankin Bass was the ultimate in TV animation, especially where the holidays were concerned. They're the guys responsible for about 95% of my favorite Christmas specials as well as Mad Monster Party (which I sadly had to wait until adulthood to discover). So we thought it was very cool in 1972 when Rankin Bass came out with a weekly TV show called Festival of Family Classics where they'd adapt classic stories in their unique style.

It's probably been since 1972 that I've seen an episode, but my memory about them is that they were never quite as cool as they should've been. Certainly not as thrilling as the opening title sequence suggested with its parade of awesome characters. There was something thrilling about seeing Johnny Appleseed and Sleeping Beauty share a rainbow bridge with a dragon, a Jack O'Lantern-headed guy, and another dozen or so famous characters from various stories and fairy tales. The adaptations couldn't possibly live up to that.

Seeing the two-part episode of the 20,000 Leagues adaptation again, the trustworthiness of my memory is confirmed. Rankin Bass abandoned their signature style of animation for it and adopted something closer to Hanna Barbera. That's pretty cool, actually. A story about a tough guy whaler, a crazed sea captain, and a world-traveling submarine should look more like Johnny Quest than Frosty the Snowman. Where the adaptation goes wrong is in its pandering.

I don't recall if this was my problem with the show as a kid, but Rankin Bass chose to dumb down the material a significant amount. They turn Conseil into a young boy and make him the focus of the story. Not Ned Land, not Captain Nemo, not even Professor Aronnax. Those guys are all just background characters in Conseil's story. (I forget if they kept the name Conseil or changed it. I'm thinking they must have changed it.)

The problem is that "Conseil" still doesn't have anything to do. The real story is going on around him, but he doesn't participate in it a whole lot. He's the character we're supposed to identify with, but all he does is observe, so we're extremely distanced from the action.

Also, there's an annoying dolphin named Fifi that follows the Nautilus (whose design is pretty much plagiarized from the Disney version, not that that's a bad thing) around the world because it's inexplicably taken a liking to "Conseil." This becomes important (but no more believable) in the climax when the Nautilus is headed down into the whirlpool and the main characters need saving. So this version does improve on the book in that it at least tries to explain how Aronnax and Company escape the maelstrom.

Other than that though, Rankin Bass follow the novel pretty closely. Too closely, considering my feelings about the book. It's mostly a series of unrelated stories as the Nautilus travels around the world. There's no real drama; just a boy and his tag-a-long dolphin friend.