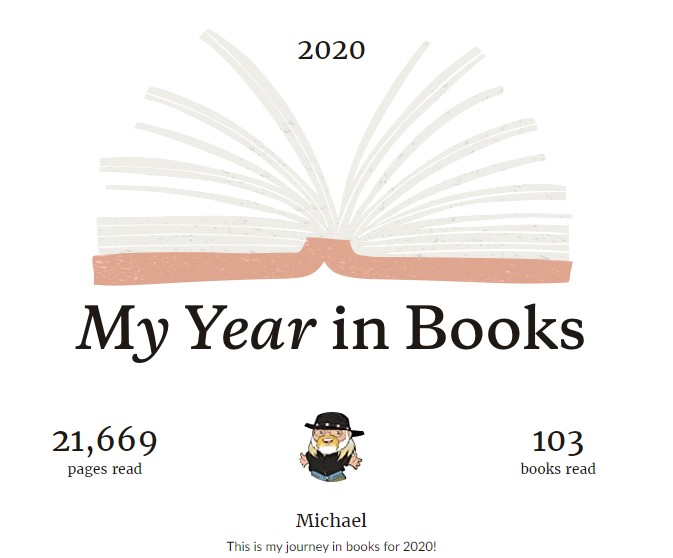 2020 was a good reading year for me. I was already making reading a bigger priority heading into the year from 2019, but then not being able to go out much translated directly into more time with books. I'd set a goal of 52 books for the year and almost doubled that with 103.

As usual, though, tracking my reading through Goodreads leads to some misleading data. If I decide not to finish something (like the 642-page The Historian) Goodreads still counts all the pages as if I've read the whole thing. And my total count includes short stories, children's books, graphic novels, and comics collections, which are all pretty quick to complete.

Still, I love looking at the stats, like how the most popular book I read last year was Little Women (also shelved by 2.6 million other Goodreads users) and the least-popular was the graphic novel The Brontes: Infernal Angria (read by only 9 other users).

My average rating of all my books was 3.9 out of 5 stars, so I enjoyed most of what I read. Obviously I'm not going to list everything I read here, but I do think I'll talk about my favorites of the year, starting with comics and children's books today, then get into non-fiction and novels over the next couple of days.

I did a better job in 2020 than I usually do reading stuff that came out that year, but a lot of these will be older than that. 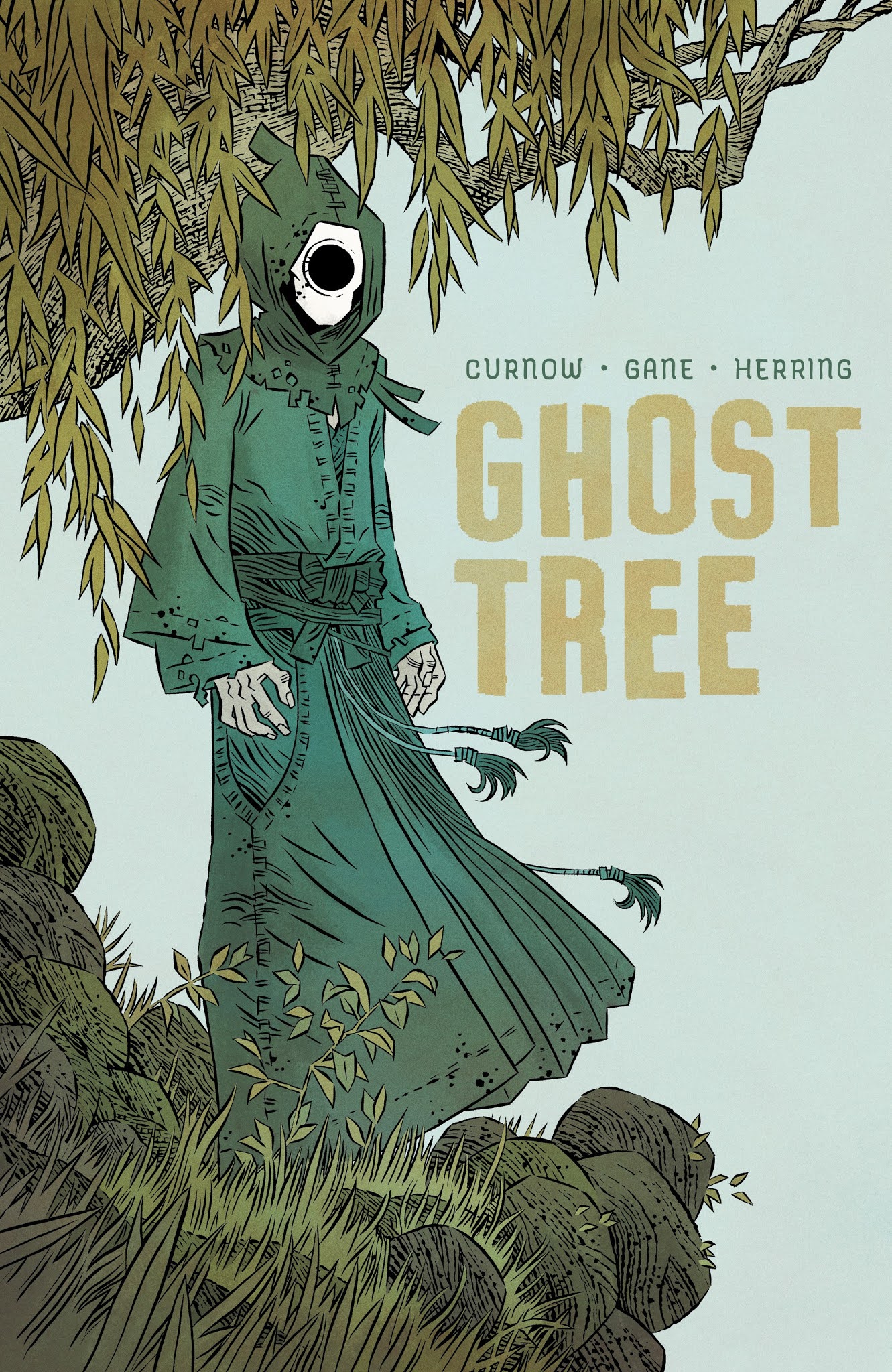 Ghost Tree is a beautiful ghost story, but while the ghosts are real and there's a tense moment or two, the emphasis isn't on horror, but the ghosts as metaphor. The main character is a young man named Brandt who's returning to Japan partially to fulfill an old promise to his deceased grandfather, but also to escape the stress of his failing marriage and to try to figure out what he's going to do next.

I may not be going through the same issues that Brandt is, but I related to his desire to hold onto the past as a way of escaping his responsibilities in the present. I liked the guy and hurt for him and rooted for him to figure things out. And I think the ending is perfect. 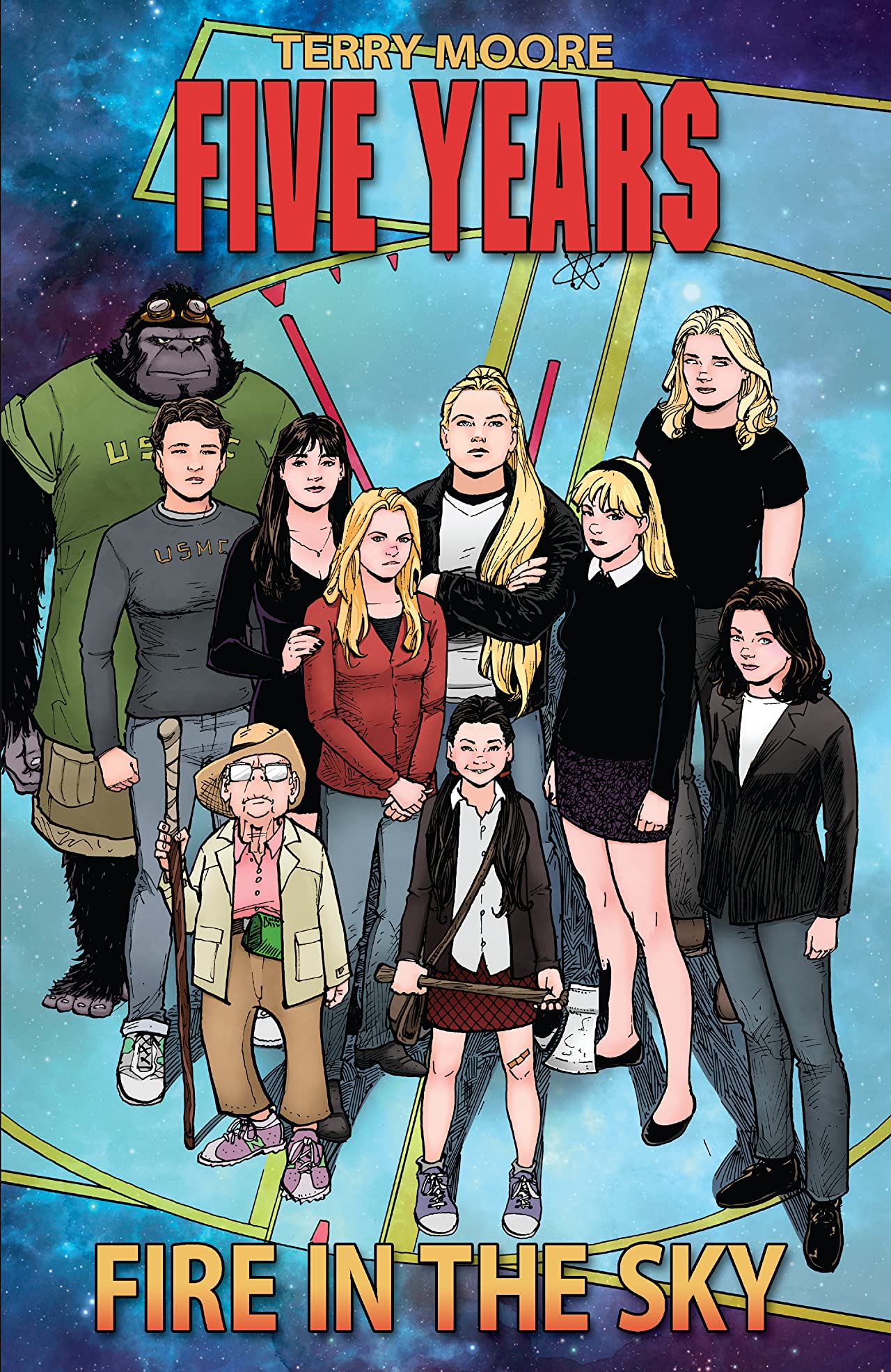 I became a full-fledged Terry Moore fan with Rachel Rising in 2019. I'd tried his first huge series, Strangers in Paradise, a long time ago and decided it wasn't for me, but I enjoyed Motor Girl and then Rachel Rising just pushed all my buttons. It's a great story, but what I really fell in love with was Moore's art: his ability to differentiate characters (not as easy as it sounds), let pictures do the hard storytelling work, and draw literally anything well.

Five Years aims to pull Moore's various series together into one story, which is incredible considering the diversity of genres he's worked in. I just wanted more of the Rachel Rising characters and planned to be easy to please, but finished Five Years flabbergasted at how seamlessly Moore combines characters and plots from romance, science fiction, and horror comics.

It's so strong that I'm not only going to check out Echo (the one Moore series I haven't yet tried), but I'm also going to give Strangers in Paradise another look.

The Graveyard Book by Neil Gaiman, P Craig Russell, and Others 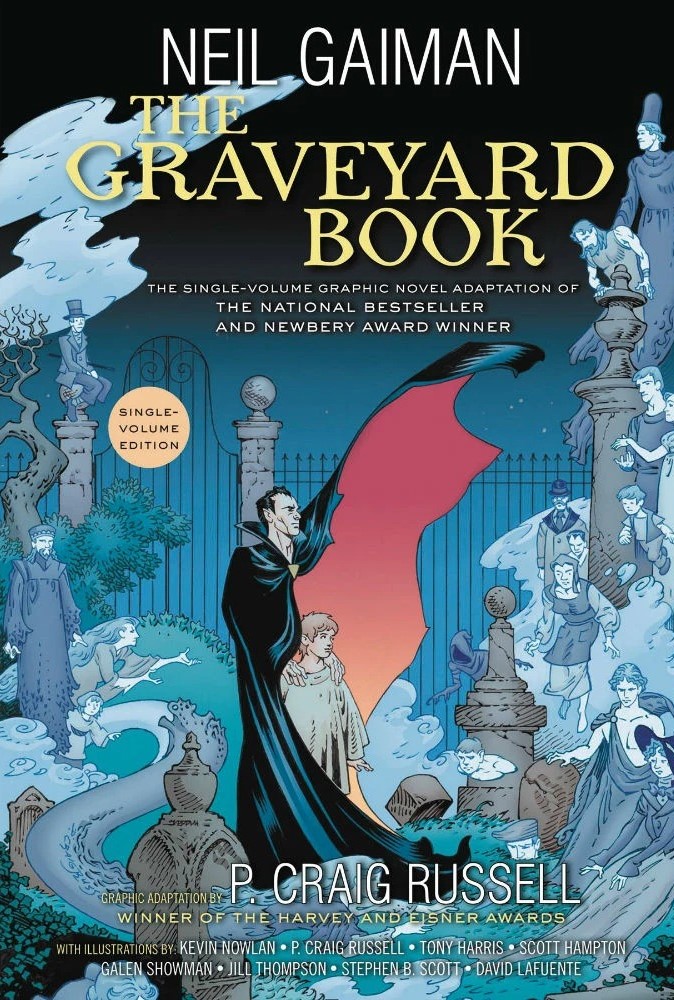 I haven't read Gaiman's novel yet, but now I want to more than ever. I love the structure of each chapter being more of less self-contained, but with a subplot that works through each story and pulls them together. I don't know how much Russell was in charge of collecting the various artists who visually depict each chapter, but it's a Who's Who of fantasy and horror virtuosos. The art is lovely.

If I had one complaint, it was that the individual artists appear to be repressing their own, unique styles in favor of a unified look. Maybe it's just me. Maybe it's just the color palette that makes it all so consistent and I'm imagining the rest. But Kevin Nowlan, Tony Harris, Scott Hampton, and Jill Thompson have very different styles and I'd love to see that emphasized more. That bothered me less and less as I kept reading though to the wonderful, touching conclusion to the story. 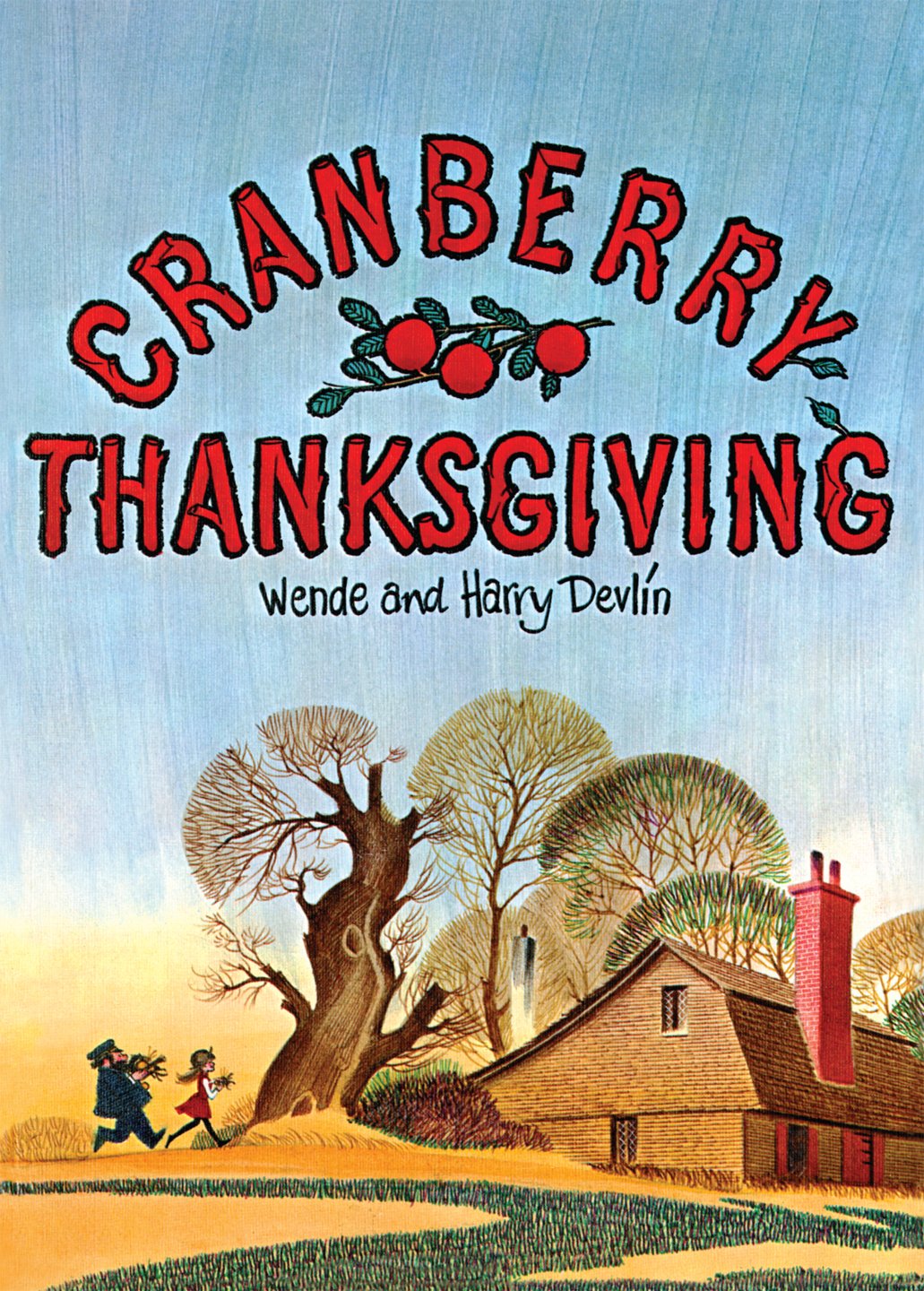 This was a holiday tradition growing up and it's impossible to separate the book from the great memories I have around it: especially my mom reading it to us and baking the cranberry bread recipe that's included (and is also a crucial part of the story). Nostalgia aside though, the illustrations are unquestionably beautiful and evocative and I love the message about not judging people by appearances. 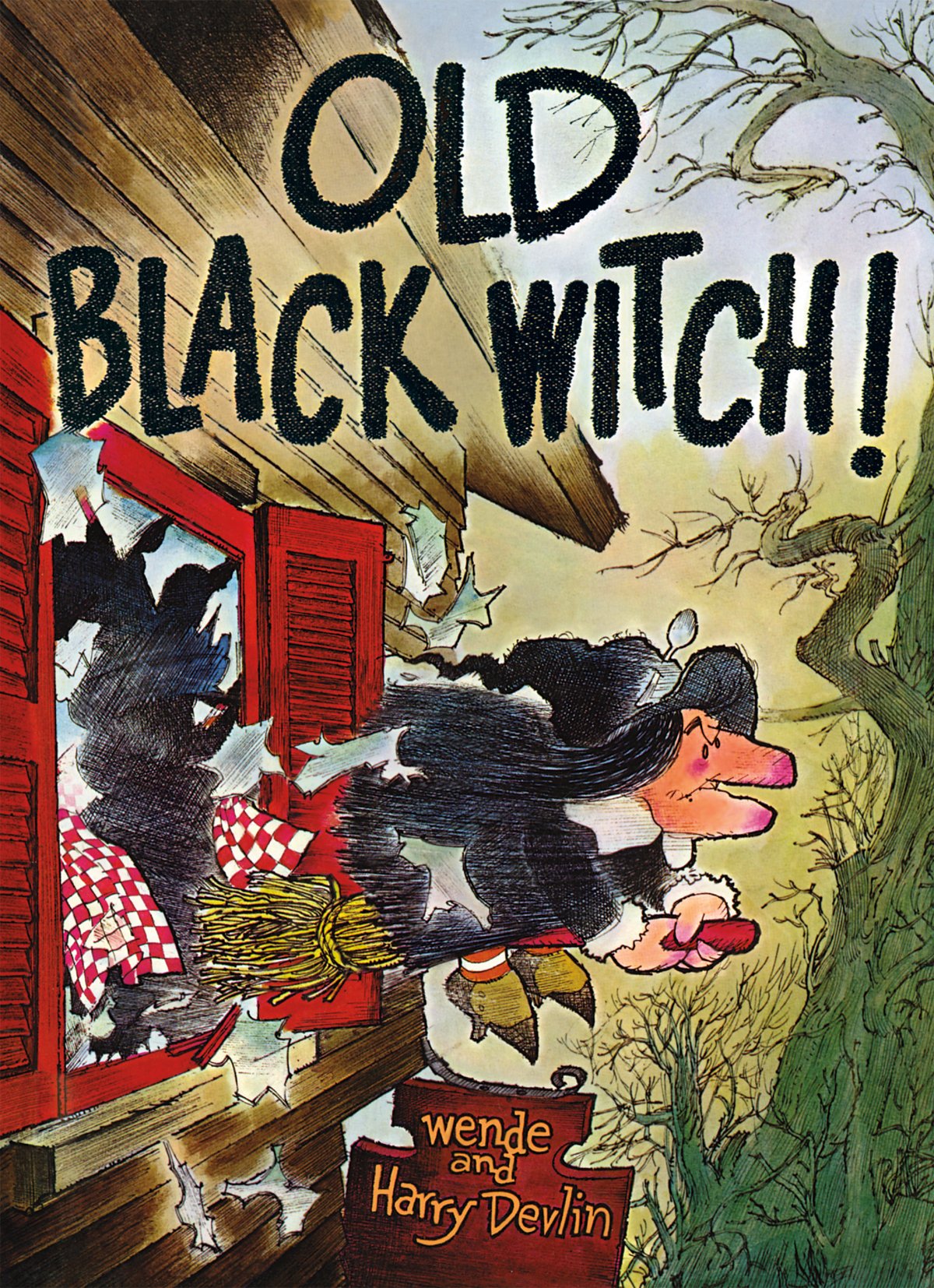 Between Cranberry Thanksgiving and a book called Old Witch and the Polka-Dot Ribbon, the Devlins' books were a huge part of the holidays for my family when I was a kid. Like I said above, I have a deep, nostalgic connection with the art and also with the stories that combine dark(ish) outsider characters and vibes with the coziness of fireplaces, plaid tablecloths, and warm baked goods. Each book also includes a recipe for an item mentioned in the story, and my mom made regular use of those. So these books also bring back great memories of smells and tastes.
Old Witch and the Polka-Dot Ribbon was the second in the Old Witch series and we didn't have the first one, Old Black Witch, in our library for some reason. But I've read it since at some point and decided to finally get my own copy this past Halloween season. The art is as lovely as I remember and I still have a strong connection with the theme of different kinds of people living and working together, with kindness, understanding, and good manners winning the day.

Thanksgiving in the Woods by Phyllis Alsdurf and Jenny Lovlie 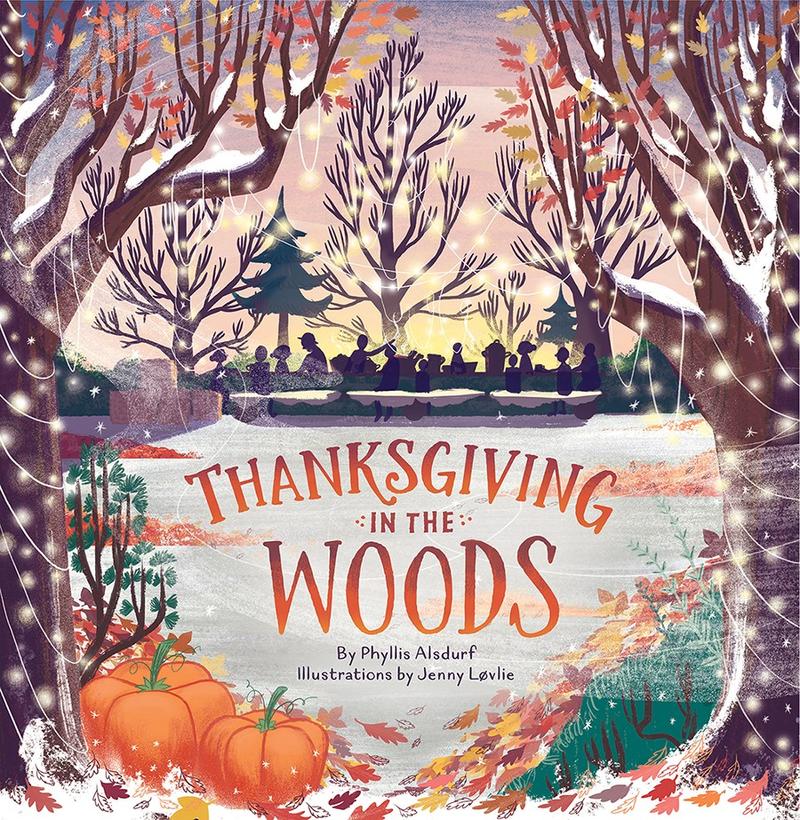 I bought this book in 2019 at a book fair, just because I loved the art and the feelings of comfort and camaraderie that it evokes. It's based on an actual Thanksgiving tradition of a large, extended family in New England and while I personally hate eating outside, I'd do it for the celebration described in Thanksgiving in the Woods. It's lovingly written with gorgeous illustrations that make me wish I was there.
at January 07, 2021

Ha! I'm writing my year end round up too! I was just working on my books yesterday!

Yeah, the Goodreads log is great, but I too lament how easily you can "game the system" with misleading stats like unfinished books, and even comics. If I read a collected comic series, but Goodreads only has the individual issues, then I get possibly 5 extra entries. It's just a wacky way to do it. I also log my reads to my ongoing Google Spreadsheet and everything there is collected correctly under the title so it's a more true accounting of the total number of things I read this year.

Good list. I've been intrigured by Terry Moore's Rachel Rising. I'd seen you write about it before. I'll have to check it out.