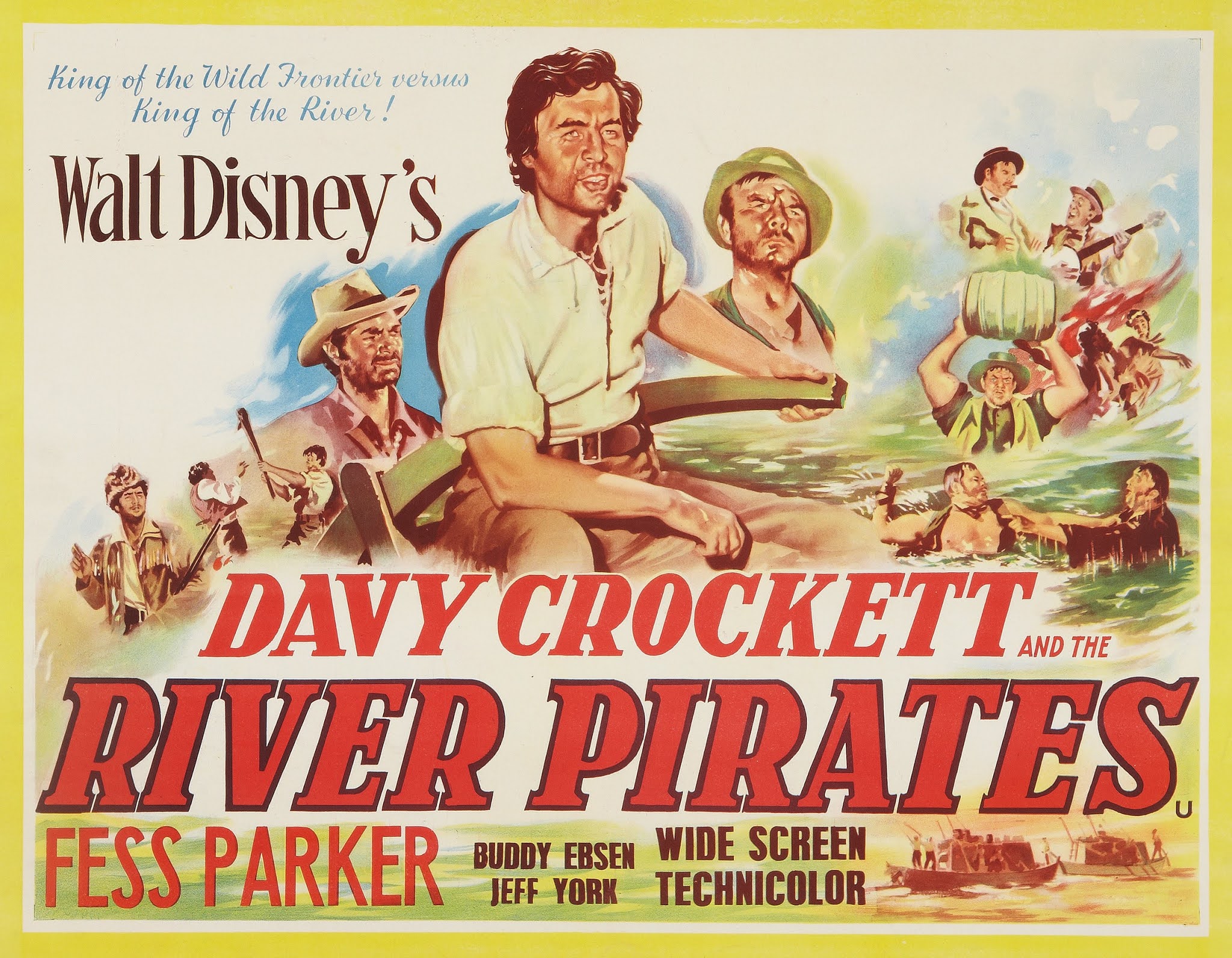 The Far Horizons begins and ends in the Eastern US, so Davy Crockett and the River Pirates makes a nice follow-up for my Western History film project. It takes place mostly on the Mississippi River as legendary frontiersman Davy Crockett (Fess Parker) and his trapping partner Georgie Russel (Buddy Ebsen) work to get their furs from Kentucky to market in New Orleans.
Disney's Davy Crockett movies follow a weird timeline. They started as five episodes on the Disneyland anthology TV show on ABC. The first three episodes aired in December 1954 and January and February 1955, covering the major events of Crockett's life: his conflicts with American Indians, his election into Congress, and his death at the Alamo.
That was supposed to be it, but Parker's portrayal of him was so popular that Disney produced two more episodes at the end of 1955. And since it was impossible to do a sequel set after the Alamo, they set the new episodes in 1810 during Crockett's adventures as a trapper. This is also just a couple of years after Lewis and Clark returned from their Western expedition. So even though Crockett never goes West in these prequel episodes, they fit nicely in the chronology and introduce a character who's going to play a big role in Western history.
The first three Disneyland episodes had been combined in May 1955 and released in movie theaters as Davy Crockett: King of the Wild Frontier. Following that model, the last two episodes were also combined to form the theatrical release, Davy Crockett and the River Pirates in July 1956.
River Pirates is a simple, fun adventure. Parker is super charming as the impeccably honest, relentlessly brave Crockett. And Buddy Ebsen makes a delightful, loyal, and competent sidekick.
And even though the film was edited from two different TV episodes, they're narratively connected and feel like part of the same story. The first half is Crockett and Russel's trip downriver and the second half is their trip back up. There is a clear break between the two parts though and the trip down is the more compelling.
The first half is a race between Crockett and the self-proclaimed river king (and cheater extraordinaire) Mike Fink (Jeff York). A lot of it feels like a Bugs Bunny / Yosemite Sam cartoon in the best possible way with Fink constantly rigging the contest or otherwise sabotaging Crockett's team, but Crockett good-naturedly plows on and finds ways to catch up. It's a lot of fun.
The trip back up deals with the titular river pirates who appeared in the first half, but now have to be stopped before they start an all-out war. They disguise themselves as Indians when they attack, which is creating tension between the local settlers and the actual Indians who live in the area. It's a fine setup for a story, but most of it is a long battle and I got a little impatient by the end.
Still, I was excited to revisit Parker's Davy Crockett and River Pirates didn't disappoint. I'm looking forward to watching King of the Wild Frontier again soon. And even though it doesn't fit in with this Western History project, I think I'll also revisit some of the 20th Century Fox TV show Daniel Boone.
The historical Boone was active during the Revolutionary War period and didn't actually wear the fringed buckskins and coon-skin cap that Crockett did, but Fox had set their hearts on a new Davy Crockett series starring Parker. When Disney refused to sell the rights to Parker as Crockett, Fox simply renamed the character and some of the locations, but kept everything else. And gave him a much better theme song.
at July 15, 2020