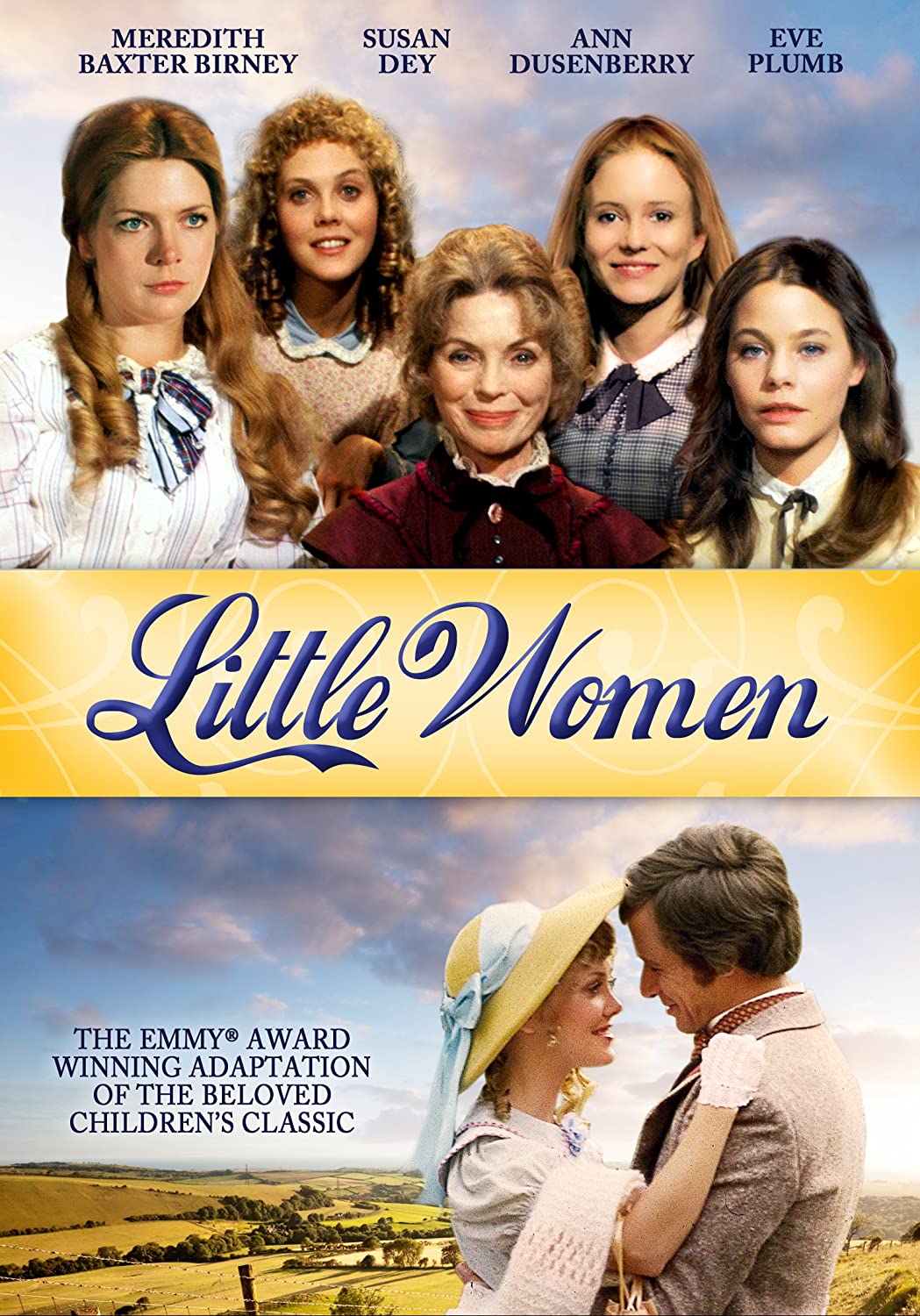 The 1978 Little Women was a two-part mini-series aired over a couple on nights on NBC. Little Women isn't something I would have showed up for at the time, but I was super excited to watch it now. It has a Who's Who of '70s and '80s TV actors with Susan Dey (Laurie Partridge) as Jo, Meredith Baxter (Elyse Keaton) as Meg, and Eve Plumb (Jan Brady) as Beth.
Ann Dusenberry, the actor playing Amy, isn't as recognizable, but she was in an especially memorable episode of magnum pi that we covered on the recent AfterLUNCH discussion (she plays an unhinged woman who falls for Magnum and tries to murder Mimi Rogers), so even she was fun. And then there's Robert Young (Marcus Welby) as Laurie's grandfather, William Shatner as Professor Bhaer, and John de Lancie (Q from Star Trek: The Next Generation) as Amy's suitor Frank Vaughn.
As entertaining as the cast is, they're also quite good. Meredith Baxter is classically beautiful and refined as Meg, but she's also kind. She's perfect playing the oldest daughter who remembers better times and is trying to stoically endure her family's reduction in finances.
Susan Dey... I've recently run into a couple of roles of hers from the '70s that I'd never seen before and they never fail to remind me that my crush on Laurie Partridge was real and strong. She's lovely as Jo and the script really emphasizes her struggle to control her temper.
Eve Plumb doesn't get much to do as Beth, but she's fine. And I like that the mini-series has enough time to explore Beth's realization that she's dying and how she helps Jo to come to terms with it. Jo's reluctance for change is a big theme that this adaptation pays a lot of attention to.
Amy is always a challenging character to cast because she's so young at the beginning of the novel and so matured and improved by the end. There are actors who make both parts work - I think Elizabeth Taylor and Janina Faye are good examples - but Ann Dusenberry isn't one of them. She's fine as the older Amy, but never convincing as the younger version.
I don't know Richard Gilliland, but he had a recurring character on Designing Women as well as a ton of guest roles on a gazillion other '70s and '80s TV shows, so his face was familiar to me. He's a good Laurie, even though the script goes pretty dark with him. It really plays up the conflict between him and his grandfather and goes to extremes with Laurie's fall into drinking and gaming. There's even a scene where Laurie and his grandfather strike each other, which I thought was excessive.
But of course it works out okay in the end and Robert Young does well with both the stern and gentle aspects of Grandfather's personality. I do think those aspects could be better integrated, but that might be more of a script problem than the performance. It's easy to see what Laurie has done to make Grandfather angry, but Young's character seems to switch quickly between hot and cold.
One of the performances I most looked forward to didn't appear until the second of the two episodes and that's William Shatner as Professor Bhaer. The professor is a tough character to do well, because he usually comes across as too old for Jo and creepy in his interest in her. Shatner is 20 years older than Dey, but he's using all of his considerable Captain Kirk charm to make a super charismatic character that it's easy to believe Jo falls for. I could do without Shatner's version of a German accent, but he's the best Professor Bhaer so far. He has a horrible, out-of-character line of sexist dialogue at the very end - suddenly insisting on being the master in his and Jo's relationship - but that's on the script.
I'm also not crazy about how the script has Jo narrate the whole story first person. Or then again, maybe I am. She's talking the whole way through about her family life and her journey to become a writer in this bygone era, so it reminded me a lot of John Boy's voice-overs on The Waltons.
The Waltons was super popular at the time, so Jo's copying him sometimes feels like a ripoff. But other times, the cast and Jo's descriptions just made me super nostalgic for this age of television. And that was really pleasant. I think I enjoyed Little Women '78 more than it probably deserves, but I'm okay with that.

What did you make of Greta Gerwig's version? I was one of the curmudgeons that thought chopping up the timeline broke the emotional arc of the story.

I loved it. I hadn't yet read the book at the time and it had been a long time since I'd even seen another adaptation though. I didn't really have anything to compare it to.

But the actors were all so extremely good that it really got to me. I'm curious to see what I think when I revisit it after all these other versions, but I still expect to be wrecked by it.