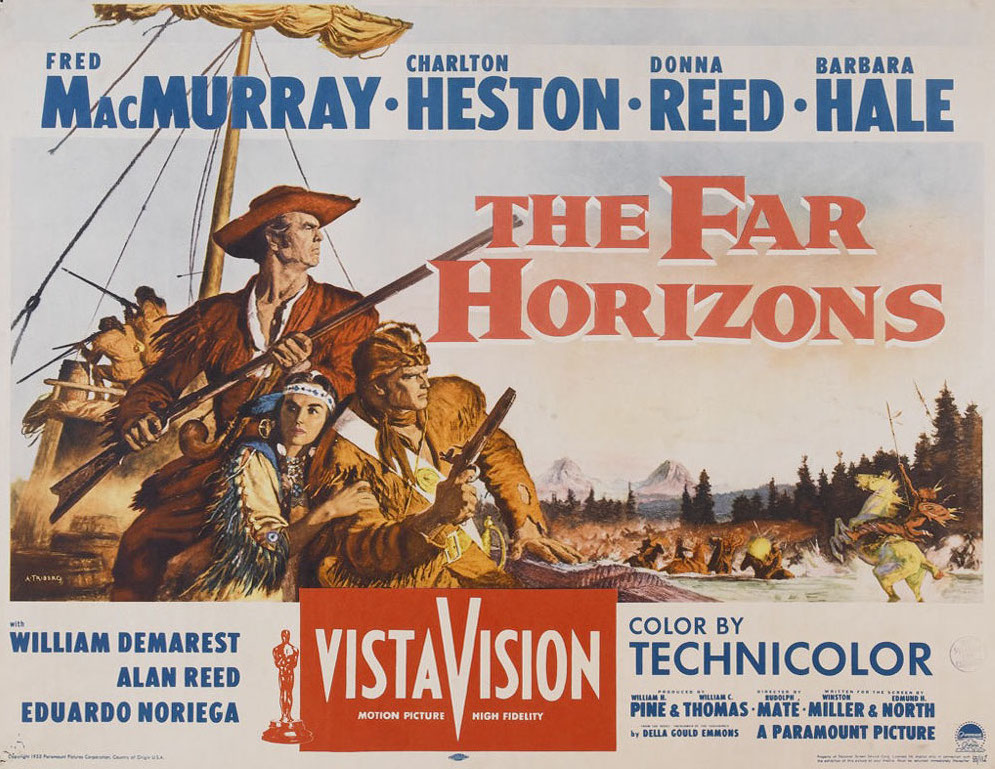 I've finished the Zorro section of my Western History movie project for now, exploring the time of the Spanish occupation of California. Meanwhile, back East, the barely-30-year-old United States is concerned that their new country is surrounded by not just the Spanish, but also the French. That's what sets into motion the events of The Far Horizons.

Thomas Jefferson (Herbert Heyes) has just pushed through the Louisiana Purchase, acquiring a bunch of French-controlled territory as well as France's promise that they won't compete with the US in taking a lot more uncontrolled land from the Indians who live there. Jefferson is eager to get the land explored and surveyed to cement US control over it. He appoints Army Captain Meriwether Lewis (Fred MacMurray) and his buddy Lieutenant William Clark (Charlton Heston) to do this.

The film never mentions Manifest Destiny. Jefferson's stated concern is that he wants to protect the US from the European powers that currently surround and threaten it. In Jefferson's opinion, the US will only be safe and prosper if it extends from the Atlantic to the Pacific, so he orders Lewis and Clark not to stop their exploration at the border of the Purchase. They're to keep going until they reach the Western coast and claim it for the US. So while Manifest Destiny never comes up as a concept, it's there in practice with the US and European powers assuming that they have the right to take whatever they can get their hands on through negotiation, trickery, or outright violence.
I'm not an historian and can't comment much about the accuracy of this or really any of the films I'm watching for this project, but I assume that all of them are willing to sacrifice historical fact for good drama. That's not even a criticism; I would too. But I've done enough reading about the Lewis and Clark expedition to be surprised by the romance that Far Horizons forces between Clark and the Indian guide Sacagawea (Donna Reed). That didn't happen.
But again, no judgment. I'd be okay with the fiction if the relationship actually worked in the context of the film. It doesn't though, and that's my big problem with the movie. There's no sweetness to the relationship or any other reason for me to root for the couple. In fact, there's every reason not to want to see them together since Clark is already engaged to a perfectly likable woman (Barbara Hale) back East.
Another huge barrier to the Clark/Sacagawea romance is the casting of Reed. She's a fine and charming actor, but she's in no way the right person to play this role and it's painful to watch. They have her in thick, brown makeup and a bad wig and she's not for a second convincing as an American Indian. Not that the big issue is how convincing she is. She never should have been cast, period, even if the makeup had been better. But on top of that, her appearance is a constant reminder of how artificial the story (and its central romance) is.
A third thing that keeps me out of the relationship is Clark's giving Sacagawea the nickname "Janey" because her actual name is "too long" for him. That's apparently historically accurate, but my understanding is that the real Clark called her that as slang for "the girl" and not as a European-sounding pet name for someone he's supposed to be in love with. It irritates me both ways, but it's especially damaging to any investment I might have in Clark and Sacagawea's relationship.
As far as I can tell, the romance is there for two reasons. First, it creates tension between Lewis and Clark. Lewis is in love with Clark's back-East fiancée and doesn't want her to be hurt by Clark's dumping her for someone he met on the trail. Despite the difference in Lewis and Clark's ranks, Lewis had promised Clark an equal position as co-leader of the expedition, but Lewis forgets all of that and orders Clark to sever his relationship with Sacagawea. This could have been a great dilemma if I cared about Clark and Sacagawea staying together. But I was more upset about Lewis' going back on his word and pulling rank.
The other reason for the romance is to sort of comment on the differences between Clark and Sacagawea's worlds. Everything is hunky dory out here in the Wild West, but what will happen when Sacagawea returns to Washington at the end of the journey? There could be something there if the film cared to dig into it, but it's only superficially interested. Or again, maybe I'm the one who's superficially interested, because I don't really care whether or not Sacagawea is able to fit in and stay with Clark. Instead, I'm rooting for him to honor his commitment to Barbara Hale.

On the positive side, the movie was shot in Paramount's VistaVision and there's plenty of gorgeous widescreen photography of beautiful country. And the score by Hans Salter is appropriately sweeping and epic. And there's also a lot of buckskin jackets and fur caps. Visually, it's a feast.
It just needs a better story to drive it. I wish someone would make a mini-series that deals with the expedition more honestly while also exploring the various Indian perspectives on it. The Far Horizon does a little with the Indian point of view, but those who cooperate with Lewis and Clark are clearly the Good Indians and those who are suspicious of the explorers are clearly the Bad Ones.
at June 17, 2020